It's been a while, I know, but Jen has been working hard to get you another Who Did It Better list. And this time, things are getting steamy in the elevator! 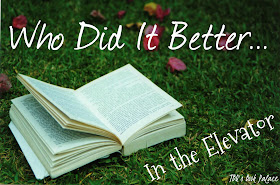 
Elevators are the perfect, ready-made symbol for modern society: they open and close, they go up and down, they can be public or private. It’s fascinating to me how elevators tap into some primal place in our brains---think of all the movies and TV shows where characters meet up, break up, and hook up in elevators. I think most people would agree that having sex in an elevator just sounds...uncomfortable and kinda scummy. Nevertheless, I was easily able to come up with five books with memorable elevator hook ups or sex scenes that were already on my Kindle. So even though the logical part of our brains knows having sex in an elevator wouldn’t be all that fun, they really work as a symbol: for the lure of being caught, the hint of voyeurism, or maybe it’s the chance to act out your very own Will Gardner-Alicia Florrick fantasy (The Good Wife). (Meanwhile, my biggest nightmare is getting trapped in an elevator without my phone because I wouldn’t have anything to read!)


As always, the ratings below are just for the elevator scenes, not the entire book. 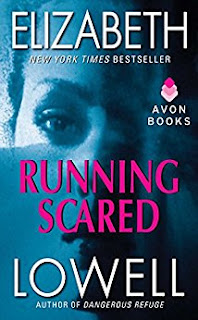 Why? I know, I know. I completely lost my mind about that one Elizabeth Lowell book (hate-tweet thread!), but she was really the gateway drug to romance for me. In Running Scared, Risa Sheridan works for casino owner Shane Tannahill. Even though there is tons of sizzling chemistry between them, neither wants to ruin their working relationship. Risa narrowly escapes being accosted by a man in a casino, and retreats to a staff elevator after talking to security. The threat to Risa breaks down Shane’s barriers and rules. He crowds her into the elevator and uses his keycard to immobilize it, prohibiting anyone else from entering. He freaks out about her being hurt and they kiss wildly. This is the part I will never forget though, it says that “With one hand, Shane covered the ceiling camera lens. With the other he grabbed her and stopped her question with a kiss that made her forget to breathe.” Their kissing escalates, and he suggests boosting her up so she can smash the camera lens. They realize this won’t work, so they ride up to an apartment and that’s where they do the deed. I like that they’re thinking about the cameras, but what the hell is with Shane’s ten foot long arms? Next time you’re in an elevator, see if you or anyone you’re with is tall enough to both comfortably palm the ceiling and also still able to make out with you. I anxiously await your reports. 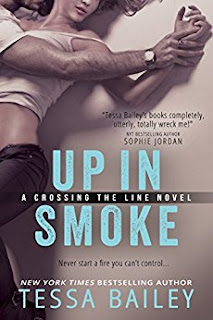 Why? Erin O’Dea is a criminal, an escape artist, and an arsonist. She’s also afraid of being physically touched. Talk about a challenging woman to fall in love with! But ex-Navy SEAL Connor Bannon is fascinated by this compelling, interesting woman. He overcomes her fears of touching and they start a steamy affair. Connor is determined to help Erin get over some of her other phobias, including her fear of elevators. They arrive at the Willis Tower (everyone here still calls in the Sears Tower, by the way) and they make out in the empty elevator going up to the Skydeck. I’m not sure sexy times are an effective strategy for overcoming claustrophobia, but it seems worth a try! Even more incendiary foreplay happens in the the crowded elevator on the way down. They’re both so turned on that they flee to the nearest dark, quiet place they can find to have sex. You guessed it: a movie theater! The elevator scene show just how much Erin has begun to trust Connor, but also how serious he is about taking care of her. I might have ranked this higher, but as a Chicagoan, I can tell you, it’s impossible to ride up on those elevators alone. Even if there aren’t tourists, there are tour guides, and there’s a bunch of bullshit touristy stuff before you can get out to the Skydeck floor. Platinum medal tourist destination if you’re ever in town, but a 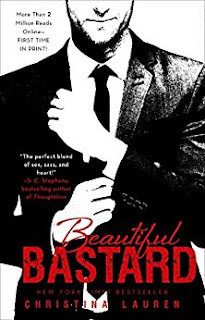 Why? The Beautiful series is the gift that keeps on giving when it comes to these silly lists I’m making. In Beautiful Bastard, Chloe is a part-time MBA student working as the assistant to Mr. Bennett Ryan. He’s snooty, difficult, and hot as hell. Chloe is sure she can’t stand him, but one night they finally give in to the simmering attraction between them. I liked how this book explores physical vs. emotional attraction. They have sex practically everywhere in the office building, including this scene in an elevator. Mr. Ryan just made a few jokes hinting at their relationship during a meeting, and Chloe is sure he’s trying to expose her. He thinks it’s funny; she’s sure it will ruin her career. After riding up 15 floors together with other workers, they are finally the last ones on the elevator. Bennett hits the stop button, determined to figure out why Chloe is angry. But their explosive feelings quickly turn into hot and heavy kissing, they cover the camera with a post-it note, and start having sex. Unfortunately and awkwardly, they’re interrupted by the intercom and the capable building staff start the elevator again. This book is non-stop hooking up in inappropriate places, a metaphor for their inability to commit to the emotional intimacy that frightens them both.

Heat It Up by Elle Kennedy
Available in the Hot and Heavy: Out of Uniform Book 2 anthology
Add it on Goodreads
Kindle | NOOK | Kobo 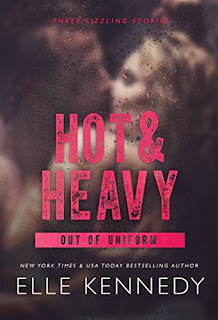 Why? Jane is determined to land an interview with Thomas Becker, the Navy SEAL who saved her sister. They are briefly introduced. Jane pitches the idea of an interview, but he refuses and gets in the elevator to leave. Outraged by his curt dismissal, she follows him even though she’s claustrophobic and usually takes the stairs. They are basically strangers when they go into the elevator, which of course gets stuck. Beck is cool, calm, and collected; Jane is not. Sensing her rising panic, he hopes to calm her by pulling her in for a hug. She can’t calm down, so she kisses him. Next thing you know, they’re taking off their clothes. Props to Elle Kennedy for having Jane think, “She’d had one night stands before, but always with men she’d known for more than twenty minutes, damn it. And never in an elevator.” There is no question that Jane is in the driver’s seat for this encounter.  And it’s not just making out, they full on have sex in that elevator! It’s also hilarious that the guy who rescues them won’t meet their eyes---there was a camera, and he knows what they were up to. Lol. I liked the added degree of difficulty on this one...strangers trapped in an elevator and one of them is a Navy SEAL? I mean, really, what else are you going to do? 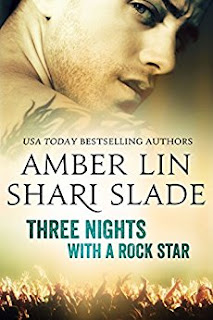 Why? I hate it when readers and authors use the word “clean” to describe books without sex, but the highest compliment I can give a book with intimate, explicit, and inventive sex scenes is “filthy.” And Three Nights with a Rock Star is FILTHY. In this book, Hailey enters into a no-holds barred sexual contract with rock star Lock. Before she even meets him, she stumbles upon a couple having sex in an elevator and they make it clear she’s welcome to join them. Let’s just call that Chekhov’s elevator, shall we? Later in the book, there’s an intense sexual encounter between Hailey, Lock, and his bandmate, Krist. It starts out in a limo, then Krist and Hailey together give Lock a blow job in the elevator, followed by the three of them having sex in the penthouse. There are repercussions, of course. All hotel elevators have cameras, and unlike every other elevator adventure on this list, these three weren’t thinking about who might see and distribute the security footage. Oops. Either way, for sheer commitment to the “sex in an elevator” trope, Three Nights with a Rock Star is the clear winner.

There you have it -- the list you probably didn't know that you needed, but you did! Thanks, Jen, for all the work you put into these. YOU ARE MADE OF AWESOMENESS, HAVE I TOLD YOU THAT TODAY?


Oh! There is one book that I've read with this: Hearts in Darkness by Laura Kaye. Excellent book, a bit of a heavy backstory for the hero, if I'm remembering correctly, but it was a favorite of mine a few years ago. Two strangers are stuck in an elevator when the power goes out. And things heat up while they try not to panic too much.

Do you have any other hooking-up-in-an-elevator romances to recommend? Leave them in the comments below!